Toowoomba Second Range Crossing, the wait is over 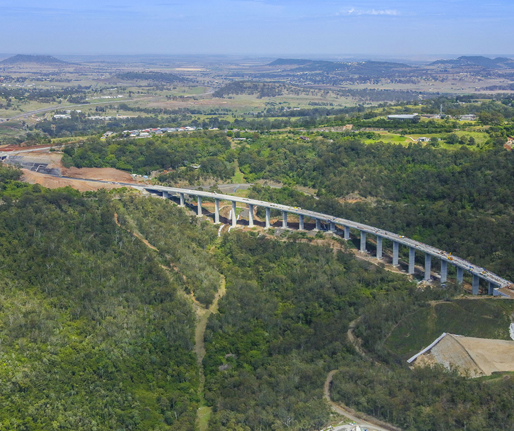 The Toowoomba Second Range Crossing has long been one of the highest infrastructure priorities for Queensland and with $1.6 billion investment from the Commonwealth and State Government, it is now a reality.

Nexus Infrastructure began construction of the 41km heavy vehicle route in 2015 and in September 2018 the bypass will finally open just in time for the Toowoomba flower festival.

“Connecting the Warrego Highway at Helidon Spa in the east to the Gore Highway at Athol in the west, the new Toowoomba Second Range Crossing will form a vital strategic link within Australia’s National Freight Network and Toowoomba’s emerging intermodal network,” Mr McCormack said

The TRSC will create a safer, faster and more efficient route for connecting freight to major ports and markets. Toowoomba is a significant regional hub and the surrounding regions rich agricultural, gas and mining outputs contribute 20 per cent of the Port of Brisbane commodity exports.

Census data from 2012 indicates 23,000 vehicles crossed the range daily including 3,500 heavy vehicles. Primary production and general freight made up over 90 per cent of truck movements with an additional 2.7 per cent OSOM, 3.2 per cent FMCs, and 3 per cent fuel transport.

The Queensland Transport and Logistics Council has long advocated for the construction of the TSRC providing a number of critical reports includingA Focus on Freight – Toowoomba Second Range Crossing and Future Freight in Queensland from a Global Supply Chain promoting the productivity benefits of enabling higher performance vehicle access to the route.

Extended B-Triple (or similar HPV) access is one of the most significant potential benefits of the TSRC, with a direct benefit for the Dinmore abattoir, which is the largest in the Southern Hemisphere, processing 3350 head per day. Queensland has almost half of Australia’s cattle herd and the majority of the states feedlots and processing capacity is in the south east corner.

QTLC advocated for larger livestock truck combinations to have access direct to JBS at Dinmore as the optimal outcome for safety, efficiency and productivity. In choosing the alternative option of Gatton as a break down point QTLC believes an effluent facility at the site will provide considerable benefit.

Professional livestock carriers are using effluent tanks to reduce public hazard and biosecurity risks. The issue remains once collected what can the driver do with the waste when the tank fills up?

The Australian Livestock Transport Association identified the TSRC as an opportunity to invest in an effluent facility and President Ian Wild is calling on “Queensland Government and Local Councils to commence planning for the construction and funding of managed roadside disposal sites for livestock effluent in South East Queensland”. Read the full article here

The issue of tolls has been hotly debated since the TRSC construction was announced. Queensland Trucking Association CEO Gary Mahon has been unwavering in his pursuit of the government to commit to a toll industry can work with.

‘I am pleased to be able to tell you that Minister Bailey and the Palaszczuk Government have clearly listened and today have announced the toll arrangements which are a good result particularly the dropping of the super heavy (multi-combinations) toll proposal.’ Gary Mahon said.

The freight industry has responded favourably to the $22.85 toll for all heavy trucks/combinations over 4.5 tonne as it is very comparable to the Gateway Motorway rate.

The Hon. Minister Mark Bailey MP has indicated the toll is unlikely to cover the annual maintenance cost leaving the government with an ongoing commitment. For the first three months, the TRSC will be free for all to use. For detailed information the Minister’s press release can be accessed  here and Transport and Main Roads website here.